Yesterday I brought to you the first book in the Legacy of Light series. This one was just as good but so much more frustrating because of the events that happened in book one! There was honestly so much and I have no idea how events in book 3 are going to go.

NOTE: If you did not read A War for Magic there will be spoilers. The review for A War for Truth is spoiler free, as always.

A War for Truth 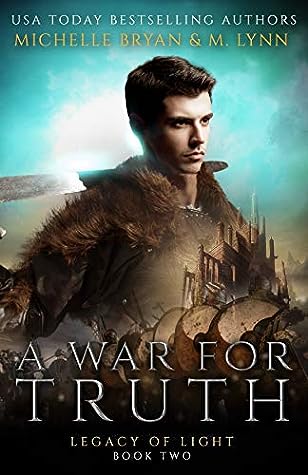 Instead, I have a new life, one full of questions.

I don’t remember my life before I took a sword to the chest, but I’m told I was a prisoner of our greatest enemy.

And now they’re coming to reclaim me.

I’m Davion, and I don’t know the kind of person I am. All I know is I have to train. My magic is the only thing that will protect me against what’s coming.

Yet, I see her, this girl who should be my enemy. She’s in my head, refusing to let me go.

So, I wait for her to come. I long to see the look on her face when I capture her. Rissa Renauld won’t see me coming.

Or, maybe it’s the other way around.

Because some part of me knows I don’t belong here. That maybe my place is on the other side of this war.

Well, this story has gone in a completely different direction than I expected it to. Davion didn’t die but he is the son to Calis? Loralei has been working for Dreach-Dhoun this whole time. The King IS DEAD. When the end events of the first book happened I was stunned. There was so much to take in and continuing through this story, there was even more. I really liked how this story immediately picks up right after the first one. The mood is so low because of Davi’s loss and then they are continuously being tracked. Then they come across Lady Yaro in the mountains. This is where the group finds out the King was murdered but Coille and others are still loyal to their father even after his brother, Drake, said everyone was dead and took the crown himself. Each event flowed smoothly into the next. As it was in the first book, the pacing was fantastic. I loved each thing that happened, no matter how frustrating it was. It was amazing to see everything fall into place. One of my favorite aspects of this book though it the people in it. Not just the main characters but the subjects of Dreach-Sciene. It’s so refreshing to see a kingdom where their people love the royal family so much that they will always stand up for them. Usually in fantasy books, there is a bad kingdom where the royal family are hurting their subjects. So it really is nice to see a kingdom and a royal family full of decent people who care. This is what really drove the story and this book.

I’m so happy most of this book was told from Trystan’s point of view. He was really the only character that kept me sane through this whole book. I liked the little bits of Alixa’s point of view as well. It was really nice to see her progression as a character. I’m really liking the way she is developing. Davi’s chapters were so hard to read because of how his memories were altered to make him believe he was a prisoner of the Renauld’s instead of part of the family. I just wanted to shake him and be like no! They loved you and treated you the best way possible. Loralei’s chapters were also interesting as well. The way the author’s turned her into more of a broken heroine instead of a killer was really a great choice. Rissa was such a hard character for me. I loved her in the first one and her fierce personality. How she demanded to go on the trip with them because she knew she could help. Sure she lost Davi and her Dad but instead of becoming an asset to the group and learning to control her rage, she just went cold and irritating. I couldn’t stand her in this book for a majority of it. She did have her break through moments where she acted like herself. I know tragedy does different things to different people but I just wasn’t liking what she was becoming. It was just really hard to get behind her character in this book. Trystan’s development was amazing. The way he handled his grief and all of the new responsibility was exactly what I was expecting from him. I’m so glad he was the main focus for this book. I am so excited to see where the next book takes them on their journey. Especially after the reveal at the end.

Overall, A War for Truth by Michelle Bryan and M. Lynn was a fantastic sequel. Even though it was harder to read than the first book, it was meant to be. The sequence of events are really starting to unfold and the new discoveries are even more mind blowing. I love all the twists that the story is providing. I am becoming so attached to these characters and after this book, I am so nervous for where their adventure is going. While I enjoyed most of the character development in this book, Rissa was the one I enjoyed the least. Grief does different things to different people but I just didn’t enjoy how cold and standoffish she became in this book. I have a feeling she will be back to her old self in the next one though. I highly recommend this book if you enjoyed the first one and want to see this story out to the end!

So many books... So little time!

mostly books * some other stuff * too much sugar